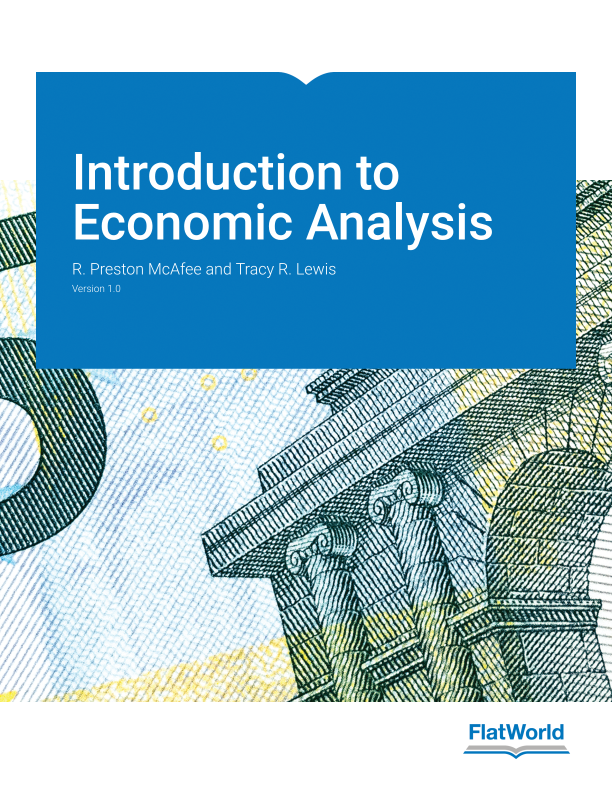 Introduction to Economic Analysis is a conceptual tool that presents standard intermediate microeconomics, as well as introductory economics material to discuss economic analysis. Standard mathematical tools, including calculus, are used throughout. This text reflects the approach actually adopted by the majority of economists for understanding economic activity.

Chapter 1: What Is Economics?

R. Preston McAfee is Vice President and Research Fellow at Yahoo! Research, where he heads the Microeconomics Group. He is on leave from his position as the J. Stanley Johnson Professor of Business, Economics and Management at the California Institute of Technology. He is one of the most influential and regularly cited economists in the world today. McAfee regularly teaches business strategy, managerial economics and principles of economics. He is the author of over eighty articles published in scholarly economics journals, many of them on auctions and bidding, and co-author of the book Incentives in Government Procurement. He is currently the editor of Economic Inquiry. McAfee served as one of four economists who edit the American Economic Review, the most prominent economics journal, for over nine years, and helped found Theoretical Economics, an open access journal. He is a Fellow of the Econometric Society. McAfee taught business strategy at the University of Chicago's Graduate School of Business in 2000 and 2001, and is the author of Competitive Solutions: The Strategist's Toolkit, published by Princeton University Press in 2003. McAfee is a recognized expert in industrial organization, and has been hired as a consultant by the U.S. Department of Justice, Antitrust Division and the Federal Trade Commission. McAfee has advised on matters concerning mergers, collusion, price-fixing, electricity pricing, bidding, procurement, and sales of government property. McAfee advised the Federal Trade Commission on the mergers of Exxon and Mobil, and BP and Arco, and testified in the FTC v. Rambus and U.S. v. Oracle on the competitive effects of the Peoplesoft-Oracle merger. Prior to joining Caltech, McAfee was the Murray S. Johnson Chair in Economics at the University of Texas at Austin, and served as department chair in 1998. Previously, McAfee was a visiting professor at Caltech and a professor at the University of Western Ontario. McAfee received the Ph.D. in economics from Purdue University in 1980, Master's degrees in both mathematics and economics in 1978, and a Bachelor's degree in economics, summa cum laude and Phi Beta Kappa, from the University of Florida in 1976.