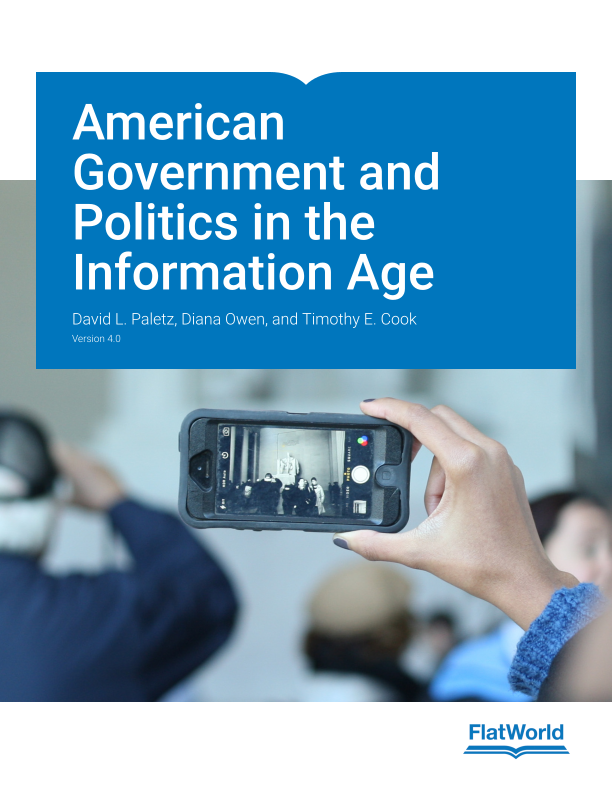 American Government and Politics in the Information Age

This textbook is a comprehensive and lively introduction to the vital subject of American government and politics. Inspired by students’ native familiarity with mass media and fluent use of communication technologies, the authors make explicit connections between the book’s subject matter, media, and technology. The book’s main areas of focus are: 1). How the media interact with and depict the American political system, 2). The similarities and differences between these depictions and the real world of government and politics, and 3). The consequences these interactions and depictions can have on the public, politics at all levels, and government operations and policies. Students develop a keener perception of how the media not only conveys information, but also how students themselves can engage productively in politics in order to “get things done.”

Chapter 1: Communication in the Information Age

Chapter 2: The Constitution and the Structure of Government Power

Chapter 18: Appendix A: The Constitution of the United States

Diana Owen is Professor of Political Science and former Director of American Studies at Georgetown University where she teaches in the Communication, Culture, and Technology graduate program. She is a graduate of George Washington University and received her doctorate in political science from the University of Wisconsin–Madison. Owen has been an American Political Science Association Congressional Media Fellow. She is the author, with Richard Davis, of New Media and American Politics (Oxford, 1998) and Media Messages in American Presidential Elections (Greenwood, 1991). She is a coeditor of The Internet and Politics: Citizens, Voters, and Activists (Routledge, 2006) with Sarah Oates and Rachel Gibson; she is a coeditor of Making a Difference: The Internet and Elections in Comparative Perspective (Lexington, 2009) with Richard Davis, Stephen Ward, and David Taras; and a coeditor of Internet Election Campaigns in the United States, Japan, Korea, and Taiwan (Palgrave Macmillan, 2017). She has published in numerous scholarly journal articles and book chapters in the areas of American government, mass political behavior, political communication, media and politics, political socialization, civic education, and elections and voting behavior. Her most recent work focuses on digital media in American elections and the intersection of civic education and political engagement. She is the recipient of a Supporting Effective Educator Development grant from the U.S. Department of Education. She is grateful for the support of her husband of over thirty years, Jeffrey.

Timothy E. Cook (1954-2006) was a political scientist who held the Kevin P. Reilly, Sr. Chair of Political Communication at Louisiana State University from 2001 after twenty years as a professor at Williams College. He was the first occupant of the Laurence Lombard Chair at the Joan Shorenstein Center on the Press, Politics and Public Policy at Harvard University’s Kennedy School of Government, and was a Visiting Professor of Public Policy at the Kennedy School. Tim was an American Political Science Association Congressional Fellow which afforded him the opportunity to study the internal workings of Congress as a participant observer. He made lasting contributions in the fields of American government and media and politics. He is the author of the landmark works, Making News and Making Laws: Media Strategies in the House of Representatives (Brookings, 1987) and Governing with the News: The News Media as a Political Institution (University of Chicago, 1999 and 2005). Tim was a coauthor of Crosstalk: Citizens, Candidates, and the Media in a Presidential Campaign (University of Chicago Press, 1996). Both Governing with the News and Crosstalk were honored with the Doris Graber Award of the Political Communication Section of the American Political Science Association for the best book published in ten years. Tim also was the editor of Freeing the Presses: The First Amendment in Action (Louisiana State University Press, 2006). In addition to these works, Tim published journal articles and book chapters in the fields of legislative studies, presidential politics, elections and voting behavior, political communication, political socialization, and lesbian, gay, and bisexual politics. Tim was inducted in the Louisiana State University Manship School Hall of Fame in 2011. Tim passed away from brain cancer at the age of 51. He is survived by his spouse, Jack Yeager, a professor of French at Louisiana State University.
Back to top